In November 2014, the Centro de Estudos e Pesquisas em Educação, Cultura e Ação Comunitária (Center for Studies and Research in Education, Culture and Community Action), or CENPEC, hosted me for a weeklong visit to São Paulo, Brazil. As a longtime consultant focused on youth engagement, I have become accustomed to touring across the North America to teach, speak and work with all kinds of diverse communities. However, nothing I have ever done paralleled this trip. Over the course of eight days, I spoke to eight different groups, workshopped with more than 300 youth and adults, was interviewed by several newspapers and television stations, and met with countless educators, activists and policymakers from across Brazil.

CENPEC is a nonprofit organization based in Brazil. Its main goal is to develop initiatives towards improving the quality of public education and promoting civic participation. Focused on public schools, public educational spaces in general and public policymaking, CENPEC challenges inequality and promotes social inclusion. Much of its work focuses on assisting the Brazilian government to build innovative policies for youth, in and out of school. Lilian Kelian, who works with CENPEC, found me from my writing. Here is a little more of that story. 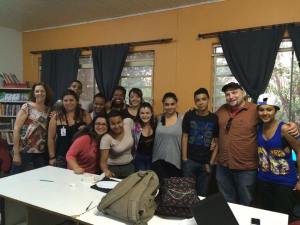 My learning began as I left Seattle, with Lilian as a kind and patient teacher for the rest of my journey.

During my appearances in São Paulo, I shared experiences and lessons I have learned through the course of my career. I facilitated workshops on youth/adult partnerships for young people and adults there with Programa Jovens Urbanos, a cultural program working in three cities across Brazil. Using interactive activities and working with an excellent translator, I found it challenging to explore the concepts of equity and equality between children, youth and adults. However, the enthusiasm of the youth and adult participants carried me and we had more than a few breakthroughs. The young people shared experiences from their own lives that sounded similar to what I’ve heard in my work across the United States and Canada: Whether inadvertently or on purpose, adults consistently use demeaning language, act in discriminatory ways, and generally treat children and youth in demeaning ways throughout our communities. These participants taught me that the effects of this are felt in schools, at cultural centers, throughout communities, and across Brazilian society.

To say that São Paulo is an enormous city doesn’t quite do it justice. There are 20,000,000 residents of the city, which makes it 2.5 times the size of New York City. Descending into the city, the skyscrapers seem to roll on and on in a never-ending quest for space. After a rushed beginning to my time there, midweek my life slowed down when I was taken on a tour. We went to a low-income suburb on the outskirts called Campo Limpo. The first organization I was introduced to was at the Casa da Mulher da Criança, which houses União Popular Mulheres. Built in a small house, I was shown an education center, a drop-in center for children, a textile center for women in the community, a professional kitchen, a computer lab in partnership with the Agencia Popular Solano Trindade, and a small office for a community bank called Union Sampaio. All of this was crammed into a humble space, and as it was carefully explained to me, it was all driven by the local community—not by government mandate or driven by government funding. I was astonished to meet a community center that was actually driven by the community it served! I also got to explore another cultural center, this one packed with active programming for young people that was happening while I was there. It included a program styled after Theatre of the Oppressed, capoeira and a few other activities. While I was at this second organization, I got to meet a group of youth who worked as program staff in this center. Harkening back to my own experience as a young person, it was energizing to find resonance with young people doing similar work more than 20 years later halfway around the world.

I met many organizations during the week. One of the most impactful experiences I had was learning about The Tree School. The Tree School is one of the most dynamic, engaging educational projects I have ever learned about. Focused on decolonizing knowledge, The Tree School was founded by two organizations: Campus in Camps, an experimental educational program based in Bethlehem’s Dheisheh refugee camp in Palestine, and Brazilian-based art collective Contrafilé. As I learned about this school, I learned the history of the baobob tree in Brazil and the potential for fully consensual schools that are based on non-hierarchical relationships between adults, children and youth. This will definitely expand my work in school transformation that I began with SoundOut. You can learn more about The Tree School from this pdf.

My last presentation was at the Seminário Internacional: Educação + Participação = Educação Integral. In this session I was credited with introducing the nation of Brazil to the concept of adultism, which is bias towards adults. Expanding on the ways adultism happens throughout society, I drilled in on schools and youth work directly, exposing some of the ugly assumptions that underlie our well-meaning but poorly informed intentions to teach children and youth. I was paired for this session with Marcus Faustini, an education activist and community organizer from Rio de Janeiro. Talking in-depth about his passionate work with youth in Rio’s flavelas, the audience laughed, gasped and clapped in both of our talks, but for different reasons. I quickly understood that Marcus and I were brothers following different roads towards a common goal, and I admired him, too.

At this same event, I was reminded by one of my hosts about the other time I’d visited Brazil. In 2004, I was invited to present at a conference focused on developing youth polices across the country, on the local, state and federal levels. She explained to me that I had left an impression then as my reports on North American youth policy had been used nationwide to inform the creation of youth involvement policies. I was told that because of my work a decade ago, youth councils, youth voice training programs and other activities are now the norm in several large cities, and they are expanding in more rural areas now. As a consultant, I am used to posing questions and challenging norms to which I don’t get to see outcomes. Suddenly, I was confronted by stories that what I had done a decade earlier made a difference. If that weren’t rewarding enough, the conference moderator announced at the end of the Seminário Internacional that what I shared this time would inform policy and practice for at least another decade. More than gratifying, that it was humbling to think that a philanthropic foundation would invest in me to travel 8,000 miles to teach my philosophies and practices in another language in hopes I would inform work to improve a nation’s educational practices. But to have that investment affirmed at the end of my work there was wholly empowering for me, personally and professionally.

The whole trip affected me this deeply. I felt a deep political affinity to many of the people I met there, an affinity that restored some of the faith I’d lost in the concept of Community. The self-defeating anarchism and alienating capitalistic tendencies I am surrounded by and part of here in the Pacific Northwest frequently exhaust me. In my consulting practice I take great pleasure at working in different parts of the US and Canada, if only because I meet people equally committed to democracy building and genuine social transformation. However, in Brazil that went to a whole different level where I felt a political communion with peers that I haven’t felt in a long time. Restorative experiences are good for anyone’s soul, and mine felt at home.

Learning about some of the radical political action in Brazil re-centered my viewpoint on what people within communities can do to improve conditions for themselves and others. The real meaning of social change soaked through the stories of the cultural centers I visited, the activist art I saw, and the evolutionary practices I saw underway with children, youth and communities. Mostly though, the whole trip reminded me that I am skilled, knowledgeable and valuable to people and communities. I had to travel halfway around the world to see that, and to have that affect me deeply. I am still learning right now, and estimate that I will for a long while.
Instead of another run-of-the-mill jaunt to help summon change across the country, this trip took me to South America in order to take me deeper inside myself. At this point in my career, I can’t imagine a more powerful, positive and restorative experience. Now to get back to work and make something of myself!

I'm a speaker, writer, trainer, researcher and advocate who researches, writes and shares about education, youth, and history. View all posts by Adam F.C. Fletcher